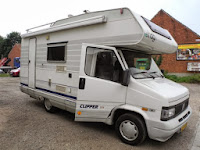 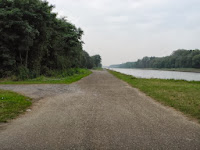 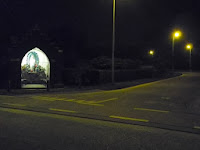 Janus arrived at the campsite around 10.30. I had planned to leave at 9 and walk at least 5 kilometres before we would meet but as so often I got into a conversation with somebody at the place where I had spend the night, a field with all sorts of houses on wheels. Pjotr/Zoe had been staying there for the last 1,5 week and was thinking about leading a life without money. We exchanged stories, thoughts, book titles. He told me where the nearest plum tree was, gave me some apples. Janus arrived in his camper van. We drove of, heading south. I had nothing planned, the only thing I knew would happen that day was crossing the route I had walked last year, I mentioned it yesterday as well, a walk from the west of Belgium to the east, with a group of artists from around the world.

We started driving the road I would have taken if I would have walked here. It didn't work. We changed tactics, using the sun as our compass, just driving south. It didn't work either. But we managed somehow.
Janus had problems with his back. He couldn't walk long distances. But he wanted to walk with me, even if it was just for a kilometre. I thought of Peace Pilgrim who walked across America, thousands and thousands of kilometres. For a long time she had refused to be in a car, until she realised telling her story was more important than sticking to her own rules. She gave lectures about what she was doing - walking for peace - and when the distances she had to walk to pass her story on became too long, she started accepting drives.
My walking isn't only about using my feet. I do want to walk a big part of the road to the Nomadic Village in Cuges les Pins but it is a mean to spend time with people. And when they can't walk but want to spend time with me, I don't mind not walking.

Janus was convinced it was my day and I should tell him what the plan was. I considered it our day but since he didn't have any requests I took him on a tour of what my days generally look like. Moving around, heading south, trying to find a nice route without drifting off too far. Nothing very special. In a way.

I had to get used to the speed of the car, the roads weren't very attractive, the villages boring and we were getting close to the area where I had walked last year. I wondered if we should cross my old footsteps by foot and we decided to stop at the first cafe to get online, look at the map, drink coffee, talk. We did. Again it wasn't green or beautiful and I wasn't sure if we were doing the right thing, if it shouldn't be more exciting, if we shouldn't be driving a beautiful road, aiming at something special to do ....even the sky was grey.
But we sat down and the coffee was good and I told my story to the lady behind the bar and the man drinking beer at the other end. We drank another coffee and at that moment it happened. A man entered the terrass carrying a box, he was the husband of the woman running the cafe. In the box he had detailed maps of France. He had just picked them up, a friend was throwing them away and his wife told him my story. He gave me all the maps I needed to walk through France, only two out of eleven were missing. A small miracle.

I didn't have to pay for the coffee. I promised them I would sew their names in my suit. Janus and I drove to the Albert Canal and walked.

What we talked about takes time to write down. It had to do with music and beauty and expectations and how a conversation can be like a walk. I wish I had time to think about it more now and write it down and in fact I do, one of the things we talked about is that you cannot not have time. It is there and you make choices. And the choice I make now is to let it rest, let it simmer, let it mix with all the other talks with other people. But I'll get back to it.

The last kilometre we walked in silence. When we arrived at the camper van, Janus was eager to write down all the things he had thought that last stretch. But he didn't. He said he would go home, walk our walk again in his head at some point and then write down his thoughts.

We ate, we drove off and at the point where the road was blocked because of construction works, I left. The walk in the dark to the campsite was about as long as my walk with Janus had been.