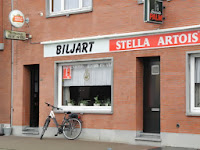 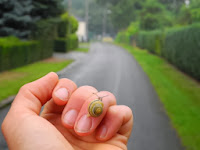 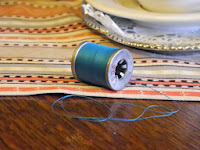 Normally I don't write until the end of the day but today is different. I'm not sure why.

It is just after 12, the middle of the day and I am celebrating Saskia's 50th birthday today. She wrote a text for me, a text in blue, a text about age. In Dutch the word for age is "leeftijd", living time. A very different word. A word you can explain in many ways, which she does in her text.

I embroidered her name in my suit this morning. Her name in blue. It is the blue I bought for Anna, Anna who asked me to think of her unborn child for a day. Or maybe I bought it for Saskia. I bought it on my second day at an antique shop I passed when I thought I was following the right river, the Kromme Rijn, the Bended Rhine, in the middle of Utrecht. It was in fact a different river, not even a river maybe, it might have been a canal, anyway .........

I bought blue thread and it is the only proper blue thread I've got with me. Loads of other clolours but no blue. It is my favorite colour though. Most of the time.

I'm home. I didn't know it when I stepped into this cafe and everybody stared at me. And that was even before they saw my suit. I was still in my raincoat. I was looking for coffee and chocolate cake. Apple pie. Something to celebrate with. I passed the grand cafe with the fancy chairs, it was still closed. 10.30 But the cafe opposite the church was open. I had passed it yesterday already. The local carrier pigeon society was located there. It looked like a good place.

Everybody stared and I took off my raincoat and sat down. The conversations at the bar started again, more beer was ordered, I asked for coffee and a big man, a young guy, looked at my suit and asked me if I was travelling with my horse. Everybody was laughing. I did too. This is how it starts always. I told him I was on foot. He asked me if I was alone and I said yes. He said he was alone as well and suggested he could accompany me. Everybody laughed again and I said yes, accompany me, but it means you have to carry everything on your back and walk all the way to the south of France. I showed him my jacket, the names, the name in blue and he asked the woman behind the bar for 5 euros and gave them to me. I want to sponsor her, he told the others. And he was serious for a moment. I asked his name. Frank.

I sat at my table and drank coffee. The men drank more beer. A woman drinking white wine had to be accompanied to her house later on. I sewed, I read, I listened to the men laughing, talking, drinking. The woman behind the bar must have been in her seventies. She knew what everybody was drinking. They all knew each other. In a way.

Radio 2. All the songs were sad. I drank more coffee. They drank more beer. It wasn't even 12. I thought about the Sunday mornings at my grandmothers house. We went there every Sunday when I was a kid. Everybody did. All my aunts and uncles were there, drinking beer in the morning. I played with my cousins. My grandfather was sitting in the corner. My grandmother walked up and down. The table was big enough for all her 12 children and their partners.

I won't be walking a lot today. My back is still troubling me. I walked to this cafe. And I will walk back to the campsite after I finished this. And tonight I might walk back here. And drink a beer with the locals. Be home again. Or not.