Two people walked with me. They were both real. But one was really present and the other one wasn't.

I hadn't seen Simon for more than two months. We met in Sweden, exploring the pioneer life and both trying to find out how we could simplify our way of existence. He lived not far from my route, he arrived in a car with the words "buurt slagers" removed from the side but still clearly readable. He had no idea it was Dutch. Or what it meant. Neighbourhood butchers.

We walked from Prévenchère through the mountains. We talked a lot and we kept forgetting to look for the proper signs. It didn't matter too much. As long as the direction was south.

Now and then Dee joined us. At regular points like a bend in the road, the bottom of a hill, the middle of a long, straight path. She had asked me to insert a simple action into my walk, she would do the same in her regular walking route:

1) pause and look ahead at the route to come and then 2) turn round and survey the route just walked. I want us to really see and notice where we are going and where we have come from. When we look ahead, we might imagine - project - an image of ourselves walking there. When we look back we might imagine what that place looked like a moment ago, when we were in it, moving through it.

Dee was wearing the hat she had been wearing when I last saw her. A t-shirt, walking trousers, walking shoes. I wondered if I walked with her in a suit. Considering she never saw me wearing anything else, I figured that was how she saw me.

At first when I looked back I saw myself repeating the movements I had made before. At least I thought I did. At some point something changed though and instead of going right I saw myself going left. Jumping over a puddle instead of walking around it. Running when I had walked slowly. And when I looked ahead I didn't see my back but I would see myself walking towards me, passing me without seeing me. Sometimes I was alone, at other times one or two of my companions joined me. There was one turn where I could almost hear them talking together. When I joined the conversation they were gone again. And when I looked back I just saw myself, standing still, listening to myself walking ahead.

We reached a town, just the two of us. Dee had gone. Back to where she came from. Or ahead, somewhere waiting for us. Simon went back along the same road. When he returned with the car I forgot to ask if he had encountered any of the projections of us.
We ate pizza without meat in the former butcher's car. Drove into the woods until we found a quiet spot. Camped under an almost full moon. 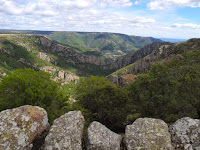 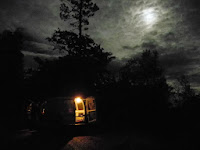