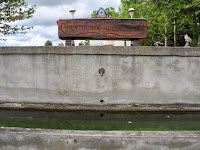 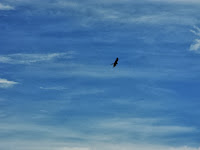 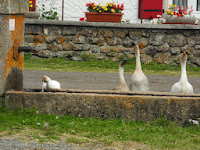 At the end of the day I am in a room with a poster on the wall depicting all the animals living in this area. I am delighted. I see some of the birds I couldn't name today. I see some birds I haven't seen. I
don't see the hoopoe.

I didn't see it today, this bird Felieke, Jan and Felix asked me to keep an eye out for. But yesterday, when I walked with a different assignment, I saw a paper cup lying on the road with the word HOP printed in big letters on the side. Hop is the Dutch name for hoopoe. I thought it might be a sign. But it wasn't. It was MacDonalds. Later on I saw two more cups. Both saying HOP.

- the sound of the green woodpecker and the sound of a pheasant while waking up
- small birds, roaming around in the bushes, invisible
- the first one I actually see! but it is too quick, it is brown, that is all I can say
- a crow crowing
- a buzzard
- a falcon
- those little brown guys, what are they called in English? one is squashed on the pavement but most of them are up in the air
- a big one with a white tail (the poster says it is a specific type of buzzard)
- loads of swallows dipping into a fountain
- four geese trying to chase me out of a village
- a big one with black fingertips (another buzzard species?)
- kites, again and again
- a pigeon now and then
- more falcons, praying
- a single magpie
- a beautiful tune but I don't know what bird belongs to it

And at the end of the day I want to camp outside to hear the owl. But the campsite is closed and it is getting dark and cold and the gîtes are so ridiculously cheap here so I find myself under a roof again.

There is an owl on the poster though. But still no hoopoe.

I take my pencil. There it is. In a big tree. 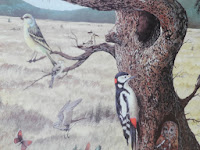 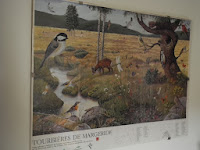