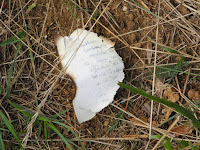 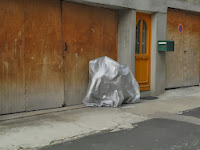 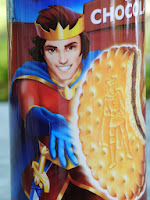 I almost ruined it in the end. It was 7 o' clock, Friday the 13th. Fee Plumley had asked me to notice the things that went right today. It had been a sunny day but it was getting cold and dark clouds were coming in. The farmers were still working like crazy. I knew what that ment. Rain. I thought of what I would write, later on in my tiny tent, freezing. I thought how I would write that of course you can't expect everything to go right on a day like this. I was wondering if I might be too late already and wouldn't manage to unpack before the clouds would open up and it would start to pour. Because pouring it would. I was sure about that. How could it not? So I decided to stop, eat what was left of my bread and cheese, the last banana, the three lonely dried apricots- why on earth had I thought I would bump into some food later on in the day?- pitch my tent behind the stack of stones and call it a day. I sat down, ate everything, saw the clouds getting closer, becoming darker. But I didn't feel comfortable about the location. Too many houses nearby. Not hidden enough.

It had started well. I had slept in the youth hostel. Nobody was at the reception when I arrived but there was a man who had an empty bed in his room so he gave me the code and showed me the bed. I slept well. I woke up early to wander around the beautiful city, le  Puy en Velay. I bought some breakfast and sat at the cathedral steps to eat it. I got the Grand Randonnée 700 guide at the information office. I left the youth hostel without paying. I hesitated, wondering if it would create bad karma and also feeling sorry I hadn't asked the man who rescued me for his name, he had already left. But he passed my table when I was drinking a quick cafe au lait before leaving the city. Nicolas. I thanked him, offered him a coffee now and a bed if he would ever need one in Amsterdam. Clean conscience. Moving on. Nicolas showed me where to go. I walked in his footsteps. He came from the direction I was heading, he had walked the Stevenson Route through the Cévennes. The GR 700 follows some of the same paths. I would walk in Stevensons footsteps too.
Warm, sunny, lovely. Climbing. 635 meters at the starting point, over 1000 when I stopped to install myself in my tent. When I decided to walk on.

I walked on. I passed a loaded plum tree. I filled a plastic bag with beautiful purple plums. I passed a house. Two agressive dogs approached me but I escaped. The nearest village, 8 houses big, wasn't far. One house had a sign. Gîtes de France. I rang the bell. The woman showed me a lovely house. I payed 20 euros for the night. She brought me fresh sheets. She heated the water for the shower. She brought bread and ham and cheese and canned paté and a sausage and tomatoes and very tasty "cornichons" and coffee and a roll of chocolate princes. It didn't rain. Or maybe it did but I didn't hear it because I was listening to some music or sleeping like a rose in the big soft bed.

Man. I felt like the luckiest person on earth. 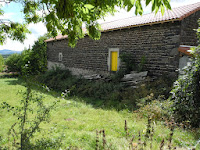 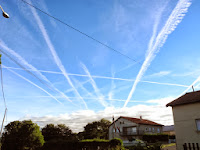 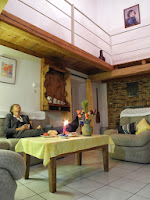