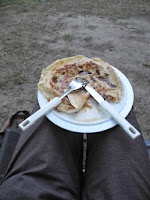 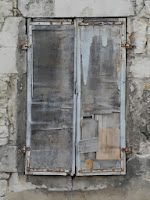 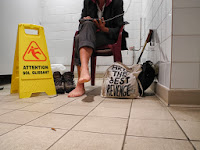 The day started with a song. It was a song I knew, I could hear it somewhere in the back of my mind but I no longer knew the proper melody. Sylvia, who had given me the song to spend the day with, used to sing it a lot when she was a kid. It was her favorite song, she loved the melody and for her a whole new world was hidden in it. The song is about a strange poor guy who was tired of walking and had lost his flute, the thing he loved most in the world. The person singing the song had found the flute. As simple as that.

She sang it for me when I woke up this morning.

I got the biggest place at the campsite, number 13. It had the most sun. And a beautiful tree. My neighbours borrowed me a chair. I heard the song in my head.

I sat in the chair in the sun for a while. Then I walked. Through the streets of Chagny. Old buildings, stone walls, small shops. I heard the song. I still wasn't sure what the melody was but I heard it. And another song. A sad song. A song about a young cow on an old farmer's wagon on its way to the market, looking sadly at the birds, singing and flying around freely. I heard my mother sing it.

There were three walking routes indicated. I took the shortest one, 11 km. The blue route. It was nice. Fields and hills and views, small and big animals, nothing special. I tried to find the right melody for the song. I kept hearing the other song. I saw the strange poor man walking past the wagon with the young cow.

I came home. Sat in my chair. The neighbours brought me pancakes with maple sirop and green tea. I charged my ipad in the sanitary block where the only socket was. Somebody invited me for coffee and chocolate. We talked for two hours. I returned to the sanitary block, plugged my ipad in again, sat on a plastic chair in my three piece suit next to a yellow sign saying "attention sol glissant", "take care, slippery surface". But the ground was dry. And I heard a song. But it was the skype tune. Somebody tried to contact me.
It was my mother. The wifi signal wasn't strong enough though.