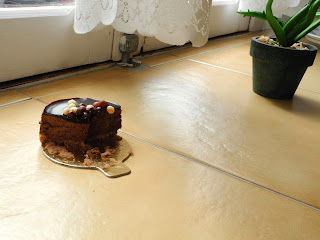 Some days are better than others. This one seemed to be one of the others. At least it started like this. 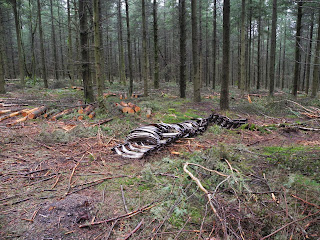 I packed and payed. Drank some old coffee.The sweet old man charged me ridiculous prices for everything I had consumed. I understood. A beautiful campsite at a lake, room for at least 150 tents and there was just me and another soaking couple.

He told me his name was Anderson, Scandinavian. I asked him if he was related to the fairytale writer. He smiled wearily and didn't answer.

The road was long and wet and muddy. More forest. I had started at 11.30, at the exact same time two brothers had started their walk from the place where their mother spend the last years of her life. I had known her well. I was wearing her wedding ring.* I had taken it off to look on the inside earlier that morning to look at the inscription but it was impossible to decipher it. She had worn it for more than 60 years. The name of her husband was inside, the man the two brothers used to walk with in the park along the river where they were walking now.

When I am travelling I still see things that would be the perfect souvenir for her. Small things. Small
coffee cups, tiny glasses, beautifully made things. I still collect stories I would like to tell her and hear her laugh. And at some point at the long and wet road I did hear her laugh. It had stopped raining and there were flowers along the road and the trees had collected layers of moss. It was actually quite beautiful. I sat down and ate bread and cheese and continued in a much better mood.

Later in the afternoon I arrived in Anost. It was still cold and wet. The campsite was nearby but I was hesitating. And it was noticed. A man along the road asked me what I was looking for and he brought me to the nearest cafe and the cafe owner brought me to a small house and there was a bed and a kitchen and a bathtub.

I unpacked, went to the bakery around the corner, bought a beautiful, small chocolate cake. Made coffee. Ate the cake. Thought of her. Thought of telling her this story. Seeing her eyes glimmer, hearing her say "...... oooooooh" in wonder.

Late at night I received some photos from the brotherly walk in Holland. They had actually walked in my footsteps. I had walked the same route on my second day. There was a photo of a pair of walking shoes that looked like mine. But they weren't mine. They had encountered another walker who was wearing the exact same shoes I am wearing.


*(Anna died three weeks before I married her son. When she died I was in the USA, working on a project about Absence. I did and did not finish my project. I was absent when I was supposed to present it. In a plane flying back to Holland. And the weirdest thing was that it wasn't just for her, but for my grandmother too. They died on the same day. Travelling together.)