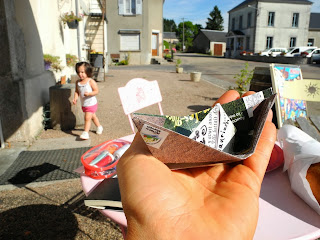 The two men were as surprised as I was to find this nice little terrass in front of the "boulanger" in this tiny village. I had just walked out of the woods, they had stayed in a hotel nearby. I was mainly there to recharge my ipad. It was empty and it comes in handy when the roadmarks are confusing and my off line maps show me how to walk.

I was walking with somebodies father today. I didn't know anything apart from his name. It didn't matter. Today was his birthday. He had died a long time ago though.

The man who was doing most of the talking was a father. His son was living in America. The other man was silently folding something. I wasn't sure if he was shy or somewhere else with his thoughts. He was folding wit a lot of attention.

After a while he gave me a small boat and a chocolate bar. He had written his e-mailaddress in the boat. He asked me to carry the boat with me until I got fed up with it or thought it was time to let it go. He asked me to find water when the time was ready and put the boat in a stream or a lake. I was touched and told him I would write what had happened to the boat but he didn't want any obligations, nothing in return. "Just let it go," he said, "it is not important for me to know where it went."

We talked some more, he said he used to be an art teacher, he never managed to become a "proper" artist but he always liked teaching. He told me a story about a student who didn't know what to do in his class and while she was saying this she was folding a tiny paper boat. He asked her to fold 450 of them. And she did. He still has them. I told them about my 3000 paper boats (or hats), folded out of newspapers from different countries, filling the floor of an old synagogue in Slovakia.

We talked about the importance of teaching, about communicating art in different ways, either by being an artist and inviting people to look at things in a different way or by teaching art and doing the same thing. We were both thinking of Beuys. And I thought about a similar conversation with somebody else on another walking day. All days get connected, are connected. I am connecting them by walking.

The men left. They walked in the direction I had come from this morning. I took a photo of their backs. I stayed for a while, thinking about the conversation, finishing embroidering the name of the man I was walking with today, Tom Voûte. I wondered if he would like to be on a boat. If I could leave him there at the end of the day. A vessel for a dead man. I imagined leaving him there until September 22, the birthday of another dead father. I could invite him on the boat as well, this other father. They are the fathers of a married couple I know from Amsterdam. I don't know if they knew each other, these two fathers, if they were friends even. But they might become friends on this small boat. Taking them wherever they wanted to go.

I fetched my Ipad. the one year old baker's daughter had managed to unplug it and was holding it in her hands, staring at it in wonder. It hadn't charged much.
I walked and thought about the two men. About boats. About how it is possible that you sense the difference between somebody being out of sight for this moment only and somebody no longer being in this world anymore.

When do you let something go? I would find it out. Sooner or later. 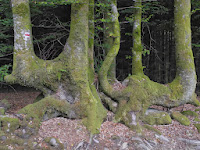 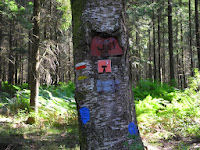 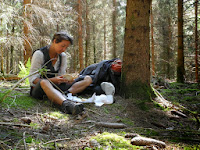