Day 21. Walking with Peggy and a dog named Misha Mengelberg


Vezelay in the morning. I found myself to be a tourist attraction. People took photos of me. A real pilgrim! People smiled at me. I felt awkward. I am not a pilgrim.

Pilgrim is a word.

I remembered my walks in Sweden. An art project in May this year, I walked a pilgrim trail with two other artists. On our third day in the cathedral in Lund a priest asked me: "Do you feel a pilgrim now?" I didn't know what to answer. I felt myself. Whatever I was. I wrote a text about it, it is here: http://www.walking-peace.blogspot.fr/2013/06/pilgrim-is-word.html

I was walking with Peggy and Misha Mengelberg today. Peggy is Paul delMaschio's wife, Misha is his dog. I've never met Paul nor his wife or his dog. We like the same poets and musicians. And I've seen a photo of his dog on Facebook.

Not until I was walking I realised how odd it was to be walking with a dog after I had been bitten by one yesterday. And I remembered how in the morning I had been looking at my neighbours' dog. He was cute and tiny, he was on holiday, his owners doing all the hard work, biking around France, while he was sitting in a cute and tiny doghouse on wheels. I was looking at him because he was so clearly enjoying sitting in the sun, stretching his neck, eyes closed.

I started late, it was hot, the hills were steep. I had promised Paul I would think of some poets beforehand but I hadn't. I had a copy of Whitman's Leaves of grass with me though. Long live the ipad-mini.

I read Whitman inbetween the walking. Encountered many dogs. Said bonjour to many women. Found water when I needed it. Learned the French world for blackberries. Arrived at a refuge for walkers at 8. I had read on their website they weren't hosting "normal" tourists, people on a short walk, pleasure seekers. I didn't fit in these cathegories. But when I was already halfway my diner (it was a wonderful diner and I was so happy to have a warm meal, a glass of wine and a bed after another long walking day) my hosts were surprised to find out I didn't have a pilgrim pass. They told me they normally didn't host people who didn't have one.

But pilgrim is just a word. A word that doesn't need prove.

I thought of Peace Pilgrim who said a pilgrim is a wanderer with a cause and about Sebald who has written in his account of an English pilgrimage that it is not about reaching some sort of christian or spiritual goal but it is about “auf eine bestimmte Weise zu gehen und zu sehen”, to walk and to see things in a specific way.

In the end they didn't mind. In the end things always work out. But it is the beginning that is often the most interesting part.

Yesterday I wrote on my Facebook page "In the middle there is no end". In the beginning there isn't one either. I wonder about the end though. If there might not be an end there either. I think there is. But like pilgrim it is just a word. The end. 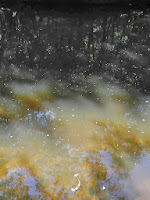 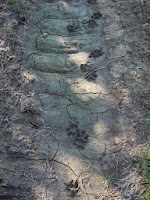 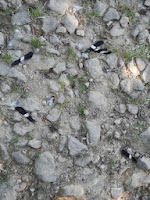