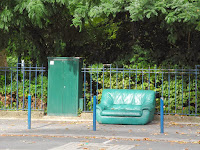 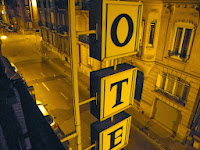 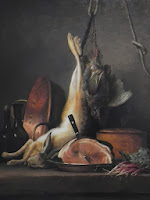 "You don’t think about towels. You don’t think about making the bed, or taking out the garbage. In theory, that allows you to focus your attention completely and solely on what you’re doing. In practice, you have to have discipline to do that as well, because a lot of people, if given the opportunity to do nothing, will do a whole lot of that.”

“One of the great lessons of hotel living is that you become very minimalist .... You just have what you need, what is of current concern. ... And you don’t have neighbours. Your neighbours are here for two days, then gone. Whereas the maids that come in regularly and the door people that you see every day, they are the constants in your life.”


Reims. I stayed. I wanted to feel as if I was one of those 19th century French writers living and working in a hotel room. My hotel room felt as if it could be that sort of room. Flowers on the wall, a french balcony, nice view but not too distracting, big neon letters outside my window spelling HOT and a good table to work at.

Not that I used it a lot. I mainly wandered the streets and thought about the text Emily had send me. The first page of her book. The first book she got published.

She writes about a moment in a park somewhere in Germany. A girl, her father, a dog. How she throes the cane and the dog doesn't return and when he does, there's hardly anything left of the cane. It is the first dog her father let her train. She suspects he has been chasing hares. She sees it in his
eyes. She secretly smoked when the dog was gone, quickly. But her father knows. He chooses not to see it though. And she knows about the hares. She can see it in the dog's eyes.
She sees a hare herself. Far away, inbetween the trees. It is running.

I wandered around in the green areas around the centre. I looked for men and dogs, I saw fathers but accompanied by small kids only. All the dogs were on leashes. I considered moving out of the city, go to the national park, find dogs running free. Dogs with gleaming eyes. I looked at my watch. I counted. I smoked a cigarette. Secretly. I don't smoke.

I went back to my hotel room. The neon light was off. I sat at my table. I drank old champagne. I wrote.

I hadn't been to the green areas really. I hadn't seen fathers and small kids. Or dogs on leashes. But I had been to the Museum of Modern Art. And I had seen the hare. It was the only painting in that section painted by a woman. It was 300 years old. It looked soft. I wanted to stroke it. But it was dead.