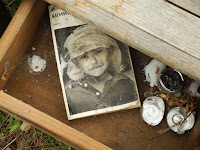 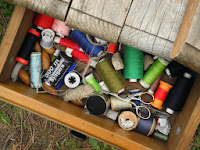 Here’s a story for you. A true story. Maybe you know it already. But it is always nice to hear it again.

One day, in the summer of 2013, when we were still building our temporary homes in the Nomadic Village, the nomads went to the recycle center in Cuges les Pins, not far from Marseille, to collect materials they might need. I was looking for things I could use to build a Memory Shop. Wood for a house, fabric for a tent, plastic for a light weight room. Instead of materials for walls I found a table with four drawers. In one of the drawers there was a book about Bedouin. I found wood for signposts. I found big rolls of sticker material in all colours. I found cloth hangers. I realised I wouldn’t need more. But just to make sure, I went through the containers one last time.

That is when I found a small silver coloured metal box. It was round. The top was black. When I shook it I heard something move around inside. I didn’t open it.

In the Nomadic Village I built my shop. It was easy. I put the table under a tree. I hung the cloth hangers in the tree. I cut out letters and shapes from the sticky material and worked on the signage. I sat on my table and opened my Memory Shop. I sewed memories in pockets. I kept the small box in sight.

People were curious what was inside. They asked me if I had opened it. But I hadn’t. I was more curious what was inside the people. And the box helped me to get a small peep inside their heads. People guessed what was inside. They moved the box in different ways. They listened to the sound. They came up with reasons why somebody would throw out this kind of box. Some people thought it was a ring. A coin. A tooth. An unpolished diamond. The key to the nomadic heart. A seed. A baby elephant. Schrödingers cat. The key to another box.

I left the box on my table unguarded a few times. I don’t know if anybody opened it. Nobody told me he did. But somebody did sent me an e-mail after I left, telling me that he dreamt he had opened the box. The content had disappointed him but the dream had given him some answers on questions he was struggling with.

Other people found other things in the dumpsters in the recycle centre. The Error Collective found a box with funny figurines. They adopted them, gave them shelter in the Error Biblioteque, a house built out of books and cardboard. One of these Little Errorists travelled with me after I left the Nomadic Village. We went to Portugal, to Amsterdam, to Vienna and back to Amsterdam. He is called Death to Those Who do not Rock. There is a guitar on his back. He likes to see me dance. I only saw him dancing once. He gave himself the task to watch over the little box and the secret inside.

I thought about that. When does one need an elephant? When did people use elephants and why? And the first thing that jumped my mind was Hannibal. He crossed the Alps with the help of elephants in 218 BC, it was one of the most celebrated achievements of any military force in ancient warfare.

In 2014 the Nomadic Village will be hosted in Austria. 2/3 of the country is covered by the Alps.

Did I already mention I love mountains? 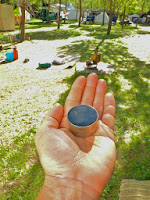 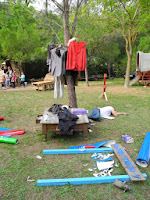 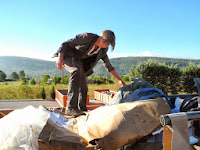