Day 37. Walking with Dix for Teun

I don't plan ahead. I wake up. I look at the map. I walk. I arrive somewhere. I never really know where.
Today I circled a mountain. Throughout the day I saw all sides of the mountain. I saw it in different lights. From different perspectives. With different eyes. I thought I'd seen it before. But I didn't think too much about it.

The forest I woke up in the morning was empty. I was on my own. The sound of my walking stick on the dry earth. In the far distance gunshots. Hunting season. I made sure I stayed on the paths.

There were signs saying I wasn't allowed to be in the forest after 11.00 because of the dryness and risk of fire. The signs saying there we hunters about were getting more prominent. But there was no other way. I continued.

My walk today was a birthday present. Somebody asked me to walk because it was his friend's birthday. I wondered if this friend thought about me, envisaged me walking, heard my footsteps even. I didn't know anything about this man, about Teun, only that today was his birthday. I thought of him. While approaching the mountain. My footsteps were his present. The view of the mountain.

No coffee in St-Marc-Jaumegarde. More people on the road. I thought it was because of the lake. The Lac du Bimont. I crossed le Barrage.

The mountain was beautiful. It looked soft. Its surface was grey and pink and a greyish green and some black dots. It looked as if it wanted to be stroked. But I was too far away still. My eyes ran over its sides, reached the peak.

And then I saw it.

My eyes ran over my map. And there it was in small letters. Refuge Cézanne. And I saw the mountain in my head. I saw all its colours, all its sides. In miniature. In frames.
I kept them closed for a long time, tried to forget. And then I opened them again.

It was huge. It was a mountain. 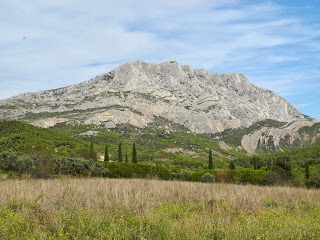