She asked me to walk with the moon and I chose a full moon day. In fact the moon was full in the morning and I already practised yesterday night, sitting outside, sipping my wine, being seduced by the moonlight. I can never resist a full moon, I have to watch it, I have to be out in the open. And I was tonight. Alone in the mountains.

I didn't walk as much today as I normally do. I took a train from Orange to Avignon, from Avignon to Cavaillon. There I took a bus to Pertuis. And from there I walked. The city was bigger than I expected, bigger than what I hoped for, big roads, fast cars, difficult walking, but I managed. And anyway, my journey isn't about walking the beautiful paths, the wonderful nature. It is about walking, moving, getting there, putting one foot in front of the other. Sometimes I wondered if I was even allowed to walk there. At this strip of concrete where cars where rushing by.

I arrived at Meyrargues, I walked into the forest, I found a quiet spot. I waited for the moon but it took so long and I fell asleep. And I dreamt of the moon. In fact there where three moons in my dream and I knew I had to choose one, I knew there would be no use in trying to focus on three moons. I didn't know which one was the real one, the best one, the one I should focus on but then I woke up and the forest was silent and the light was overwhelming. I sat in front of my tent in the moonlight. I thought I saw a deer and I bet the deer thought it saw me but we both weren't sure and we remained still and looked at each other's moon shadow. I don't know how long I sat there, it felt as if the shadows got shorter, the wood got lighter, the moon got bigger, I got smaller. 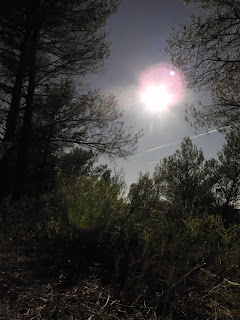 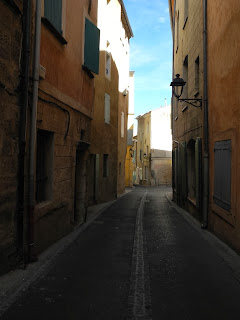