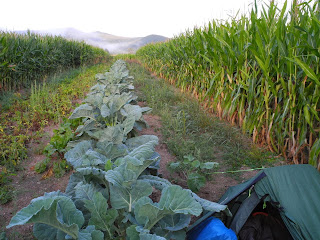 Some people I consider myself closer to than most of the people I call my friends didn't join me on my long walk. I don't mind. Friendship is never about obligations. And I figured I was walking with them anyway. Until I thought about it again today. And realised they might not be my walking partners after all.

I think they are my beacons. They show me where to go.

Today I started building a beacon myself. I didn't complete it yet, I mainly collected the material:

Everything in the colours of the trail I followed today, the red and white from the Grand Randonnée 3 and the yellow and blue from the Pilgrim Trail.

It will become a beacon for Christian French aka Transitman. I'm walking with him today and I've got a feeling he might need a beacon. Or maybe the beacon needs him to make clear what it is for.

I walked with Cathy Turner as well. Normally I don't share a day with two people but sometimes it is nice to make connections. Sometimes two walkers doesn't mean having to divide my attention but means having two times as much attention and energy.

Cathy brought in the beacons. I saw her carrying some through Belgium last year. We both walked in the Sideways Festival. The beacons Cathy carried were small, light and elegant. She left them at different sites, not knowing beforehand what would be the best place to leave them. Today she walked from Beacon Site to Beacon Site, starting in Exeter. She texted me when she was at the first one, called Beacon Heath to tell me there was no heath and no beacons.

I walked towards the mountains. Yesterday I saw them from my train window. This morning I saw them when I opened my tent. I knew I would be safe if I tried to stay close to them.

It was a long walk to le Puy en Velay. I had no idea what to expect. The small city was bigger than I thought. And it was built around two small mountains, two rocks. I climbed the stairs and steep cobble stoned roads to the highest part of the city. When I looked back, to where I had come from, the sky had turned dark and I saw the small mountain again, the rock with the chapel on top. Lighted now.

And I am not sure if this makes sense but there is something I read in Dag Hammerskjöld's book Waymarks I had to think of.

"Perhaps a great friendship is never reciprocated. Perhaps, had it been warmed and protected by its counterpart in another, it could never have grown to maturity.
It “gives” us nothing. But in the space of its silence it leads us up to heights with wide insights." 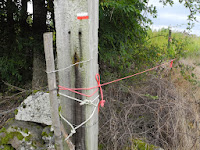 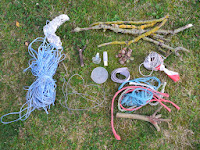 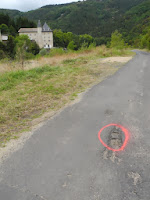