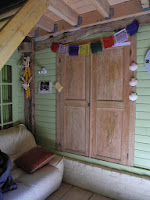 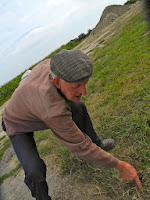 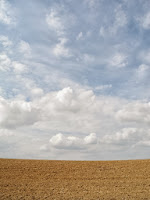 When I opened my eyes in the blue bedroom, looking out of the window into a huge shed, my assignment for that day was completed. Phil Smith, Mytho Geography, had asked me to look for places where the sacred meets the non sacred. I had slept in a small blue wooden house built for pilgrims in the corner of an enormous shed. Windows on one side overlooking the garden, windows on the other side overlooking a space filled with cars and hay and tools. I went downstairs to make some tea at the old woodworking bench. In the middle of one of the walls was a door where there used to be a window. The door was placed too high to be of use. It didn't open either. It had turned into a wall. Over it there were some small colourful Tibetan flags, left by a buddist monk who stayed in this place a few months ago. Everwhere I saw reminders of people who had passed by, stayed, loved this place and moved on. A lot of them on their way to Santiago de Compostella, about 2450 kilometres from here.

A friend had joined me for the walk the day before. We ate breakfast, homemade yoghurt and applejuice. Plums and apples from the garden. Strawberry jam. Bread. We did our yoga exercises in the garden. Warrior poses and sun greetings.

We were sad and happy to leave. It was a good place to say goodbye. Albert went north, I went south. Alone again. My feet felt light.

On the road I thought about what is sacred to me. It was a difficult question. I tried to answer it but got stuck so I just looked around me at the fields and the trees. I thought about animism, about people worshipping nature in many ways. I wondered if this road was sacred, the road leading to Santiago de Compostella, on the one hand marked as a GR route, a Grand Randonnee, chosen for its beauty and historical meaning, marked by the red and white signs, but also marked by the symbol of St. Jacque de Compostella, the coquille st. Jacques. I looked at my feet and wondered if my body was sacred to me. But again the answer was no.

The road was just the road. And I was walking it. As every day unable to continue whenever I would find blackberries.
Ploughed fields, big birds of prey, flying, praying, catching mice. The death of one creature meaning the life of others.

In Grandville I passed a church. I stood on the edge of the garden surrounding the church, one feet on holy soil, the other on very plain concrete. A line deviding the two.

I liked the curtain hanging in the church door. Material you would use on a building site. I wasn't sure if I was allowed to enter but I did. I unhooked the curtain, sneeked in. Greeted Saint Anthony looking out of a window on the right wall and remembered I had promised him a dime when I had lost my jacket a week earlier. Or maybe I really asked my grandmother to return it to me, my grandmother who must have given loads of dimes to saint Anthony during her life, always loosing things but always finding them again. She was convinced it was only because he helped her.

A fire extinguisher on one of the walls. Lack of faith or local laws securing public safety?

The graveyard was located outside the village. I could see crosses sticking out of a cornfield from afar. My other grandmother passed by in my head. When one of the 14 children she gave birth to died before it was baptised, she wasn't allowed to bury the baby in the holy ground. It was buried on the other side of the graveyard wall.

At the next crossroad a tiny Jesus was hanging from a metal cross. It ligned up with the windmills in the far distance. Two small mounts drew my attention, I liked how they were situated in the field. When I got my camera out to photograph them, a man appeared from behind the mount. He was picking up things, I couldn't see what it was. He came towards me and asked if I needed directions. I did but not the directions he was talking about but he gave them anyway. His shoes looked as if he had been wearing them his whole life. He told me my French wasn't bad for a Dutch person.

We talked. Or actually he mainly did the talking. About language, about economics, about living in this area. About how difficult it was these days to walk somewhere, to take shortcuts, because a lot of the old roads weren't there anymore. He drew lines in the sand. He talked about soil. How the soil was different where I was heading. About the importance of it. He said it again and again.
I nodded. Looked at our feet. Le terroir.

He walked back to his mount, continued what he had been doing. I walked on.

Footsteps, ploughed earth, clouds. The line where the earth touched the sky. I felt small. And I had to hurry. The hotel de ville in Chateau Porcy was closing at 5. I had been slow.

I arrived just in time. I explained I was on a long walk and needed a place to spend the night. The man behind the counter nodded and reached in a drawer. He gave me two small pieces of paper. An address and a secret code.

The door opened to a room with five beds. I was alone in there. The last pilgrim had left this morning. He had left me some wine and some soap. There was a note saying that the only restaurant in town would be cooking me a meal if I wanted.

I sat on the doorstep with a glass of wine.

The restaurant was across the busy street. Normally I don't eat meat. But sometimes you eat what you are given.

Before I went to sleep I walked through the village. It wasn't particularly nice, but everyone was greeting me. I looked up, no stars in sight. Cloudy skies. It was going to rain. But I would be inside. Inside this village's hospitality. 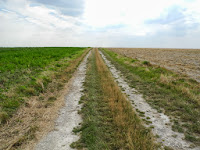 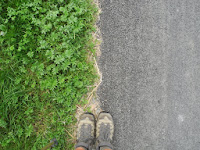